Belintash (Bulgarian: Белинташ, pronounced as Belantash and Belǎntash in some local Bulgarian dialects) is a small plateau in the Rhodope Mountains in Bulgaria bearing traces of human activity. It is assumed that this is a cult site of the ancient Thracian[citation needed], though the very essence and purpose are not yet fully understood. There are also suggestions that the sanctuary was dedicated to the god Sabazios (Ancient Greek: Σαβάζιος) built and operated by the independent Thracian tribe Bessi[citation needed]. The upper platform of the plateau is marked with carved round holes, trails, niches and steps that some researches interpret as stellar map[citation needed]. It is claimed by some Bulgarian media that in 2006, anonymous tourists had discovered the so-called “Inscription of Belintash” – a petroglyph carved into the rocks, which according to some theorists, confirm that the Thracians had their own alphabet that pre-dates Greek alphabet[citation needed]. However, the authenticity of the petroglyph has not yet been confirmed or denied by archaeologists working on the site of Belintash.

The rocky plateau of Belintash (Белинташ) is located on the ridge of Dobrostan (Добростан) in the central part of the Rhodopes Mountains (Bulgaria). It is 3 km in the south of the village Vrata and 3 km in the south-west of the village of Sini Vruh (Сини връх). It is in central position in regard to a group of rock sanctuaries in the indicated above part of the mountain: Pitvoto, In Kaya, Turskata Kulya cromlech, Karadzhov Kamuk Arc and Haydushki Kamuk.[1]

The plateau is a large rock elevation with a top area of about 5000sq.m., and south-north orientation of its longitudinal axis. Three areas – northern, central and southern – had formed on the plateau as a result of the rock sinking in most ancient times. The ancient Thracians cut in the north most part of the first area steps and niches of various sizes. Hundreds of round holes (about 300) are seen in the northern and central areas of the plateau, as well as two large “sterns” (used for sacrificial pits according to some theories) and cut in the rock beds for wooden beams. Two dug by treasure-hunters stone tumuli were discovered 500m in the north of the triangulation spot of Belintash. The tumuli mark the only way to the plateau and had been parts of a necropolis, the major part of which had been discovered. 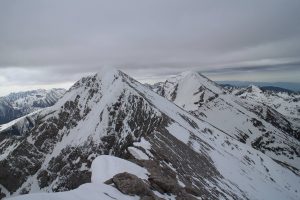 Monument to 1300 Years of Bulgaria